I haven't written a Life Update blog in quite awhile, matter-of-fact, the last time I did I'm pretty sure it was a downer and my words got erased in post. This time will be different. Sure, my mind has frolicked in the rolling hills of sadness since last we spoke, but whose hasn't? Overall, I am really happy, though, and have been for a steady 3.5 months. So much has changed in such a short amount of time, for example: I drink very little now, I no longer smoke, my bad dreams have diminished, I use my gym membership frequently, I'm eating healthier (and even growing veggies in a garden), I'm back to work full-time, I have a motorcycle now and that's just fun, period. That being said, some of those things have produced other changes, for example: poetry doesn't stir within me anymore and I've said goodbye (via silence) to that slice of my life (for now). Will I ever write poetry again? I really don't know. For me, poetry has always been the armored tank I drive through life in, firing poetical bullets at the outside world while deflecting past and present pain within the safety of my 82mm thick plated steel. Roll, turn, aim, fire! 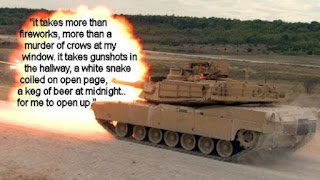 When I use the Blogger admin tools and check on my view counter I notice my poetry entries receive the most hits, so that alone should encourage me to continue writing poetry. All I can say is, "we'll see."

The list of podcasts that I listen to daily has changed as well. Awhile back I mentioned the ones I enjoyed most, but several have been added and deleted since then, so I will make a new list and share it with you now:

With a diverse list of podcasts such as those, going to work is like going to school for me. I listen to them everyday, and as you can tell my interests lean heavily toward the "history/politics/information" side of things. I don't watch syndicated television, haven't in a long time, which means my brain isn't subjected to a constant barrage of media-delivered, multimillion-dollar marketing campaigns aimed at steering (or creating) my beliefs and desires. I don't give a shit about the Real Housewives of Whatever County or which appliance I should buy from GE, but I do give a shit about the MEK Iranian terrorist organization that has been funneling money into our Congress and purchasing their influence to the point that just now, the Obama administration has decided to strike them from the Dept of State terrorist watch list. Yeah that's right, the Mujahedin-e Khalq Organization (MEK) currently sits at #30 on a list of groups that our own government has labeled as foreign terrorists, and our President has deemed them "cool". That's just one example of what can be learned by a citizen who isn't glued to the tube every evening. I guarantee you won't see that story on FOX News or CNN, that's for sure. I could go on & on with news stories not being discussed in the mainstream, but why bother? I'm a creative writer, not a political activist.

I narrowly avoided ending this blog on a political rant, haha. It's a beautiful day outside and I want to enjoy it, so I'm going to wrap this up (even though I haven't mentioned everything). Speaking of which, I have a new nephew named Trey and I've yet to fly home for a visit. This saddens me, but soon I'll take the vacation time needed to get there. I'm thinking a week in September. I haven't seen my family in over a year (I think), so I'm long overdue. Yes, I'll see ya'll very soon! I can hear fingernails being clipped in the bathroom. This is my ten minute que to exit stage left and proceed to rear, where we will then file out of the building and run across the parking lot still dressed as 16th century Victorians. I bid you adieu, fare readers.
Posted by solarjinx at 3:48 PM 1 comment:

(Part One of this short story can be found HERE)

They arrived at Em's apartment around 8:30 and found a note taped to the front door. Edgar walked back to the car and climbed into the rear seat. He held up the note and said, "Em isn't coming with us".
"Is that what the notes says?" Jen asked.
"No, that's what I say. The note just says: Edgar, I've decided to move to Arizona. I'll be living on the north rim of the Grand Canyon with a friend there. Waking up everyday in view of a magnificent ditch should help put things into perspective for me. Life IS weird... Em". Edgar stuffed the note into his pocket and stared at the white apartment door as the car began to pull away. As the door grew smaller, so did the memories of all the times they had spent together. All the drinking and laughing and shooting pool. All the poems and stories they created, all the jokes made at other peoples' expense. Yeah, it was a magical moment that could never be recreated, he knew that much for sure. Sadness over the loss of someone special wasn't an area of expertise for Edgar, so he sat in silence for most of the trip while Jen drove and Ben rode shotgun next to her. They sang songs that were obvious "pick-me-ups" chosen for the melancholy mood behind them, while Edgar looked out the window and imagined Em standing at the edge of a 2 billion year old scar, her hair whipping in the wind, her mind soaring like a falcon a mile above the Colorado River below.

Jen slowed the car as they entered the town of Cannon Beach and came to a stop at a red light. Up ahead a large pick-up truck waited in line too, its driver a bit more impatient than Jen though. The engine of the lifted Ford F-250 revved aggressively and the truck swayed back & forth, giving the impression that the machined beast was alive with fury. When the light turned green the driver of the truck stomped the gas pedal and a large plume of black carbon smoke blanketed the sidewalk next to it.
"For fucks sake, that guy is unbearable!" Jen exclaimed in anger. As they continued forward with traffic they watched the man driving the pick-up slow down every time he saw a pedestrian walking near the road, and as soon as his tailpipe was about even with them he'd stomp the gas and cover them in an expelled cloud of smoke. They were just reaching their turn off when the man in the pick-up did it again, this time to a woman holding hands with her young daughter.
"Don't turn here, Jen. Follow that truck to it's destination." Edgar said.
"Gladly," Jen replied. 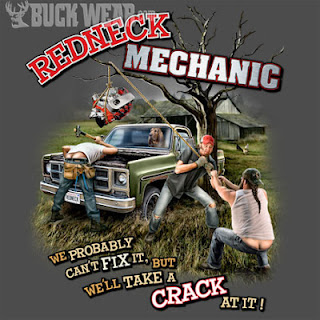