The World Is Their Stage

It's Sunday morning here in the brisk outskirts of Salem, Oregon. It's not raining today, it's just... wet. And it's not freezing, it's just... cold. All-in-all, not bad I suppose. If I turn on the news I'd see blizzards and tornadoes in other parts of the country, so I'll gladly embrace the cold and wet. Besides, I'm not having fun with the news lately anyway, e.g., top global banksters getting caught funding terrorist groups and walking away unpunished, unmanned aerial robots shooting rockets into foreign villages everyday, FOX News getting caught hashing a conspiracy to select and fund the next President of the United States, and of course the all too frequent mass shootings. And that's just a quick skim off the surface!

Speaking of news and knowledge and truth seeking, in my quest for these things it was inevitable that I would eventually set my sights on learning more about 9/11. I came to the point where I wanted to hear what the Truth Movement had to say about what happened that day, and the more I researched the more I realized I had no idea of what was going on in the "bigger picture". Fast forward to a year later (and hundreds of hours of podcast interviews, articles, books, documentaries) and I'm now well aware that there is a negative force that has washed over the global ruling elite. There are groups of people with so much power and money that "getting richer" simply doesn't suit them anymore. It's that simple, really. During the days of Myspace I remember playing a game called Mafia Wars. It was pretty awesome at first. The game revolves around fighting other players and doing jobs to earn cash, items and experience, with the goal of establishing and advancing one's criminal empire. Players create mafias by recruiting other players. You buy up land and expand territory, watch your bank roll increase, and as it does you gradually find yourself at the top of the heap. In about 3 months of play time I had reached the point where I couldn't really buy anything else. I had all the guns. I had all the buildings and owned all the businesses. I had my elite group of killer friends. My bank account was in the trillions. Basically, the entire game shifted from working hard to achieve new things to spending my wealth putting ridiculously expensive hits on the other players in the game.

That's what I think is happening amongst some of the top tier of our species. And I think we, as Americans, are living inside the belly of a powerful beast. I've traveled from coast to coast, driven through almost every state, met so many wonderful people along the way. When I look around from my level of love and compassion, I see America and it's majestic natural beauty filled with a spirited people who share the common goal of living peaceful lives. But I also see a sickness spreading, whose roots go pretty far back in history. And I also see We The People growing up and becoming just like our parents (government). When inquiring how people feel about our government, no matter which side of the political isle they stand, the reply is always is a resounding negative one. Sure, we can peek into the past and recognize some good things, but overall we are very unhappy with what our government has become. As a nation, the government is our parents. How many of you have said, "I'll never be like my parents when I grow up" or "When I have kids I'll raise them differently, I'll avoid making the same mistakes my parents made"? Exactly. Well guess what, folks, it's no different with our country. We've allowed our government to become mean monsters who bully and attack others, who use deception and theft to obtain wealth and power, who torture and kill when they see fit, who create unjust commands and punish severely those who do not comply. We recognize it, we speak out against it, we write blogs about it, we create podcasts discussing it, but in the end our parents have become too powerful and controlling and the price of this is not only our freedom, but also our spirits.

My parents weren't right about everything they taught me. Not only that, they didn't teach me everything. I have grown and learned much all by myself, and in return have taught them things. Our government is teaching us that it's okay to steal and kill. I read countless monthly news stories about people in places of enormous power crushing those beneath them while clawing furiously at their competition. Should we not be surprised when we ourselves become embedded by the same mentality, even though we aren't playing their Mafia War game? We can't smack our parents back when they smack us, so we take it out on those we can, in whatever means are available to us. Maybe you're just a little mad, so you get in a fight with a kid during recess. Or maybe you are riddled with anger, so you find a gun that shoots 30 bullets. Whatever the case, day after day we watch our parents do the very things they tell us not to, and then everyone is surprised when we do it too.

In closing, I'll say this. We need to work on ourselves more, and we need to focus on our children. Change has to begin there, in those two places. It can't be anything else really. There will always be guns, there will always be war, there will always be pain and sickness, but maybe we can lessen all of that if we hold true together and focus on what we can change: ourselves. And if you have children, for God's sake, don't fuck them up! Coddle the brilliance that can be found in a youthful mind, nurture the spirit that has yet been exposed to what's out there, teach them how to love and grow and be healthy. Give them books and music and art and math and science and history! Offer them endless possibilities, a blank canvas for life, a chance to grow up and become an adult who will create instead of destroy. Okay, that's all I have to say. For now ;) 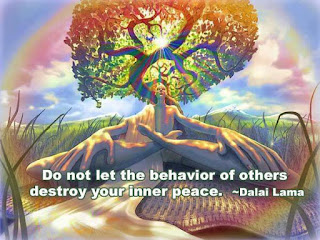